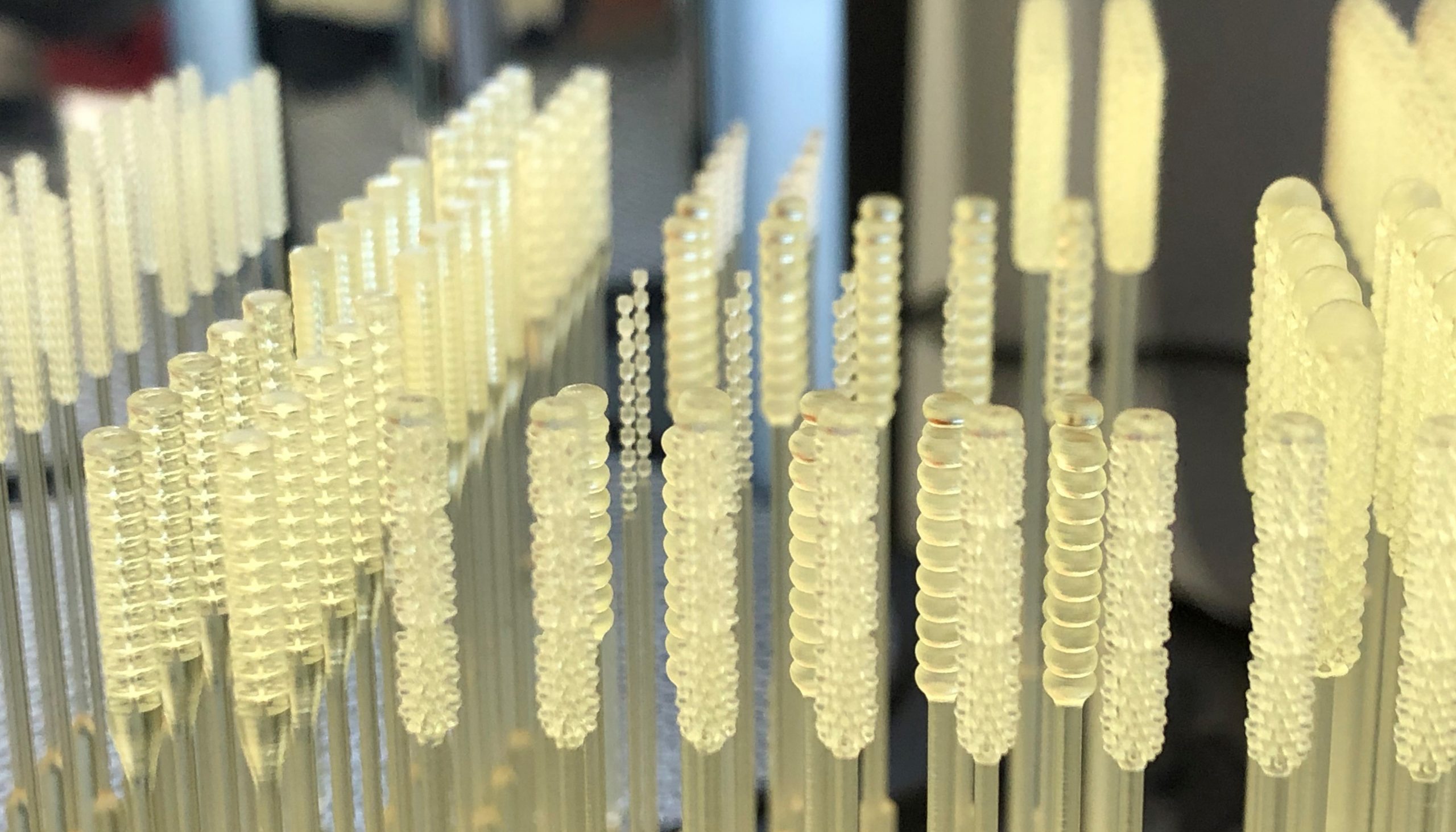 Image: Researchers at Lawrence Livermore National Laboratory mechanically tested hundreds of 3D-printed nasal swabs from more than a dozen designs developed through an informal consortium of industry, academia and government. Swabs derived from one of the new designs are being made available to medical providers. The swabs pictured here, representing a number of designs generated by the Covidswab Github collaboration, were 3D-printed at LLNL from a biocompatible, surgical-grade resin and tested in the Advanced Manufacturing Laboratory.

In this era of COVID-19, tracking the disease adequately enough to allow state and local officials to lift shelter-in-place orders and return to a semblance of normalcy in the absence of a vaccine will require widespread testing, according to medical experts. However, such extensive testing efforts have been hampered due to a shortage of nasopharyngeal (NP) swabs, the preferred tool used by clinicians to collect samples for COVID diagnoses.

To address the problem, Lawrence Livermore National Laboratory (LLNL) engineers formed an ad hoc, rapid response team that has tested more than a dozen novel, 3D-printed nasal swab designs (hundreds of individual swabs) from a grassroots coalition of commercial and academic partners. The mechanical tests performed at the Lab, simulating how the swabs might be used in a clinical environment, provided valuable feedback that improved the designs, enabling them to meet requirements for COVID-19 testing.

One of the swab designs has since received exemption status from the U.S. Food and Drug Administration and is being made available to health care providers. The Lab’s work on swabs is continuing with funding from the Department of Energy (DOE) and expanding into other 3D-printed components for COVID-19 test kits.

“We were looking at where we could contribute,” said LLNL engineer Angela Tooker, who led the swab testing effort. “We have expertise across the board in terms of design, materials, testing and manufacturing capabilities, but this needed to move so quickly that we looked at where the gaps were with the group we were working with. You could spend years working on this to find the most perfect design — we didn’t have that kind of time. It had to be good enough to get out the door now.”

In March, as nasal swab usage ramped up significantly, Ramy Arnaout, a pathologist at Harvard University’s Beth Israel Deaconess Medical Center, put out a call to manufacturers for help. One of the largest suppliers of NP swabs, based in Italy, was forced to halt shipments to the U.S. With the hospital unable to obtain them from the other major swab manufacturer, an American company struggling to meet the uptick in demand, clinicians were running low on inventory.

While simple in concept, the specialized NP swabs are not easy to produce. Nearly six inches long, the swabs need to be flexible enough to reach cells in the uppermost part of the throat without damaging tissue, but rigid enough to allow the clinician to insert them several inches into the nasal cavity and rotate them to collect samples without breaking.

Arnaout’s call grew into the open source Github Covidswab initiative, which drew institutions including Harvard University, Stanford University, University of South Florida, the U.S. Army and companies like HP, San Francisco-based health care IT company Abiogenix and FATHOM, a longtime LLNL 3D-printing partner headquartered in Oakland. Given the dire swab shortage and the dynamic situation early in on the COVID-19 pandemic, the Covidswab community could not afford to rest on its laurels, and the LLNL team offered any form of support to bolster the effort. FATHOM connected the Lab with the broader Covidswab team, which needed help testing more than 100 proposed 3D-printed swab designs.

Although an array of designs had quickly emerged and the prototypes produced within hours with the aid of 3D printing, the design-build-test loop needed to be completed. The Covidswab group quickly placed printed swabs in the hands of clinicians for qualitative assessment (evaluations done by physical feeling and observation), but quantitative assessments (tests performed with machines that report numerical values) were lacking.

In the Lab’s Advanced Manufacturing Laboratory (AML), Tooker tested a variety of the initial designs – many of them printed and shipped to LLNL by HP and Abiogenix, and others that were printed in-house based on designs from Formlabs, a 3D-printing company. She put the prototypes through the rigors of tensile (pulling apart), torsion (twisting) and bending tests, evaluating them for failure and examined the effects of sterilization (autoclaving) on the swabs’ performance.

With no readily available “cookbook” for testing the swabs, Tooker and the Lab team developed and published their own testing procedures. The results were used to compare material properties and performance of the various designs and enabled the Covidswab team to iteratively improve on them. According to Tooker, finding the right design for a nasal swab that would work in a real-world setting is a more delicate balance than it might appear on the surface.

“You put the swabs through the worst-case scenarios as far as clinical aspects go, but if they can withstand these tests, there’s a great confidence that they’re not going to break in the clinic,” Tooker explained. “The challenge is how to make it perform the way you want it to, but also make sure it as comfortable an experience for the patient as possible. You don’t want it to break during testing, but once you’ve gotten your sample, you do need it to break to move onto the next steps of testing.”

One of the 14 designs LLNL tested, Abiogenix’s FAST Spiral NP Swab, manufactured by FATHOM and printed with HP 3D-printing technology, went through 25 iterations. It was evaluated in a clinical trial conducted by Beth Israel Deaconess Medical Center, where it was identified as one of only four 3D-printed swab prototypes, out of 150 designs the clinicians reviewed, that could be used for COVID-19 testing. The swab received FDA exemption status and can be ordered by medical clinics and providers.

“LLNL was instrumental from the beginning in helping us translate our informal clinical constraints to formalized mechanical tests,” said Goutam Reddy, founder and CEO of Abiogenix. “Whether through autoclaving, aging studies, torsion and tensile testing or even modeling mucus, the brain trust at LLNL was able to dig in and help us deliver a safer, mechanically robust 3D-printed swab. We’re grateful to Angela and her team for helping Abiogenix meet the swab shortage, and for helping our country get back on its feet.”

The team is finishing up the latest round of mechanical testing and awaiting feedback from companies and clinicians for potential tweaks to the designs, but the work doesn’t end there. The team recently received funding from DOE to further research new 3D-printed swab designs, determine their compatibility with polymerase chain reaction (PCR) DNA amplification techniques and is expanding work into developing 3D-printed prototypes for vials and other consumables used in nasal test kits, also in short supply.

“This effort has really re-emphasized to me that LLNL is truly a national asset able to respond quickly to a crisis situation,” said Chris Spadaccini, director of the Lab’s Center for Engineered Materials and Manufacturing. “We are looking forward to continued contribution with our DOE partners and other national labs. Together, the entire DOE complex is having an impact, and we will be working to solve evolving supply chain issues associated with consumables for COVID-19 response.”

The aims of the ongoing research are to improve the novel designs, assess their performance and identify other potential manufacturing methods, such as injection molding, to produce them on a mass scale. As part of another consortium including a major medical device supply company, the team also is prototyping designs for injection-molded test vials that could be produced by the tens of thousands each day.

For Tooker, the collaborative effort has exemplified teamwork and demonstrated the willingness of experts to come together in a crisis, with a sense of urgency, to solve imminent problems.

“I’ve been involved in medical device research for a long time and this is the first time where you can see the benefits immediately, and that’s powerful,” Tooker said. “Pretty much everybody here has wanted to help. It’s definitely been a rewarding experience.”

Visit the web for more on LLNL’s COVID-19 response.