Ryan Wicker, Ph.D., director and founder of The University of Texas at El Paso’s W.M. Keck Center for 3D Innovation, has been named a National Academy of Inventors (NAI) Fellow. 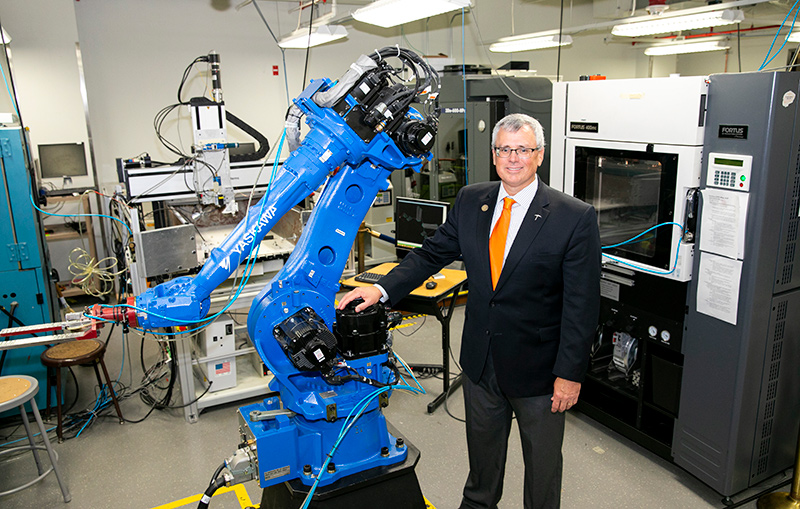 Wicker, the MacIntosh Murchison Chair I Professor in Mechanical Engineering, is the second UTEP faculty member to be named an NAI Fellow. The honor recognizes Wicker’s “spirit of innovation in creating or facilitating outstanding inventions that have made a tangible impact on quality of life, economic development and the welfare of society,” according to the NAI’s announcement. He will be inducted into the NAI with 167 others on April 10, 2020, during a ceremony in Phoenix, Arizona.

“Ryan Wicker has been at the forefront of our fast-growing research efforts in additive manufacturing,” UTEP President Heather Wilson said. “He has fostered an entrepreneurial research climate that makes UTEP a vital component of the fourth largest manufacturing region in North America. We congratulate him on his membership in the National Academy of Inventors.”

Wicker has spent his entire academic career at UTEP. Since his arrival in 1994, he has taught 10 courses related to engineering and manufacturing, including courses not previously taught at UTEP. He holds 18 U.S. patents, some of which are currently utilized in the technological development of the Keck Center. The Keck Center has employed hundreds of student researchers, many who are now leaders in the additive manufacturing industry.

“I am honored to be recognized as a 2019 Fellow of the National Academy of Inventors, a testament of the entrepreneurial culture of The University of Texas at El Paso and within the W.M. Keck Center for 3D Innovation,” Wicker said. “By engaging the next generation of diverse students, many of whom are the first in their families to attend college, the Keck Center is advancing additive manufacturing and enhancing the vitality of American industry. As a native El Pasoan, I am a humble participant in an innovative research enterprise in which my students are not just spectating, but rather, advancing the future of manufacturing and reinvigorating the local economy.”

Election to NAI Fellow is the highest professional distinction accorded solely to academic inventors. To date, NAI Fellows hold more than 41,500 issued U.S. patents, which have generated more than 11,000 licensed technologies and companies, and created more than 36 million jobs, according to the organization. In addition, more than $1.6 trillion in revenue has been generated based on NAI Fellow discoveries.

“I am so impressed by the caliber of this year’s class of NAI Fellows, all of whom are highly regarded in their respective fields,” said NAI President Paul. R. Sanberg. “The breadth and scope of their discovery is truly staggering. I’m excited not only to see their work continue, but also to see their knowledge influence a new era of science, technology, and innovation worldwide.”

Russell Chianelli, Ph.D., a UTEP professor and researcher who holds more than 60 U.S. patents, was named a National Academy of Inventors Fellow in 2018.