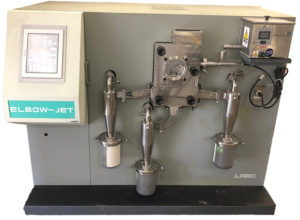 Elcan Industries, Tuckahoe, New York, is happy to offer companies the opportunity to test and toll process on the state of the art Elbow Jet Air Classifier. The Elbow Jet Air Classifier is the world’s only air classifier capable of simultaneous, multiple classification. Unlike traditional air classifiers, the Elbow Jet does not contain any rotating parts including a classifier wheel. Instead, the systems employs the Coanda effect to make separations which allow customers to make 3 cuts at once.

Separating metal powders at fine sizes is an integral part of powder production for the additive manufacturing industry. Separations down to fifteen and ten microns are capable using the hi-sifter sieving system, but as markets continue to get finer the need for smaller separations is growing. This is increased by growth in the Binder Jet industry which requires certain powder to be classified below 10 and 5 microns.

The Elbow Jet system is ideal for the AM, aerospace, and biomedical industry due to both its capabilities and construction. Heavy metal powders perform very well on this system due to their density and spherical metal powders also process very well using the Coanda effect. The machine contains no rotating parts and is constructed of all stainless steel and reinforced tungsten carbide parts.

The Elbow Jet air classifier allows companies the opportunities to make 3 separations below 44 micron at once! The Elbow Jet can allow customers to make a -1 micron, -8 micron +1 micron, and + 8 micron cut in a single pass. The machine can make fines removals below one micron, but can also make course separations up to 44 microns as well.

The machine runs completely automated and house a feeder and baghouse so it operates as a completely stand alone system. Elcan Industries has a full scale toll processing facility where companies can run powder on this equipment. Call today to find out more! (914)-381-7500 www.elcanindustries.com/elbow-jet-air-classifier/