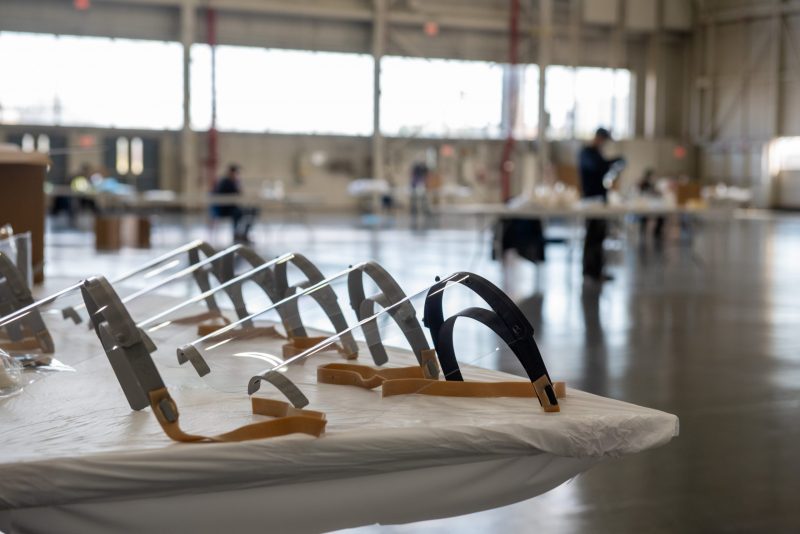 In the fight against the novel coronavirus, a medical face shield could save a life.

On March 30, Raytheon Technologies CEO Greg Hayes made a promise to the nation. At the White House, he announced the company would deploy 3D printers and other technology to produce 10,000 medical face shields. That goal was reached in 23 days, and now Raytheon Technologies is aimed at more than doubling that production while the pandemic rages.

“It’s a different war than anybody has ever fought before, but it’s a war we’re uniquely qualified to help,” Hayes said in his White House appearance.

At Raytheon Technologies locations across the nation and around the world, 3D printers – including more than 100 machines at more than 50 company locations – were quickly pressed into service to make components for the shields. By the close of the week ending April 10, the company had shipped 2,000 face shields. The week of the 17th, it shipped 3,000. The week of April 24 alone, it shipped about 5,000. By that date, April 24, 10,000 had been produced in the U.S. alone. Face shields are also being produced in France, Ireland, the U.K., Canada and Poland.

“It started when I got a phone call from Paolo (Dal Cin, head of Operations and Supply Chain) on Saturday morning: ‘Hey, Paula. Can we do something like this?’” said Paula Hay, vice president, Operations at Collins Aerospace, one of four businesses that form Raytheon Technologies. “By Thursday, we said, ‘This is what we think we can do: about 2,500 a week.’”

The effort was “all-consuming” at first, Hay said, as the company identified locations that had the right machines and sources for the materials needed.

“It’s truly an amazing team and unbelievable levels of collaboration, not letting bureaucracy or barriers get in our way,” Hay said. “Every barrier we are used to, we broke through.”

Breaking through those barriers actually began before Hayes made his White House appearance. The 18 employees at the Additive Process and Capabilities Center, part of the Raytheon Technologies Technology & Global Engineering team, received inquiries as the pandemic deepened: Could the company use 3D printing to produce such equipment as face shields?

“That’s when we started looking into that, and then it really kicked off after Greg Hayes made the commitment,” said Additive PCC Executive Director Venkat Vedula. “We looked at different design concepts, making sure we could produce them, and built the prototypes that became the files that were used across all the sites.”

“The medical staff, emergency response workers and others working to keep us safe are risking their lives every day,” said Dean Sirois, one of four engineers on the team at Pratt & Whitney’s Additive Manufacturing Lab in East Hartford, Connecticut. “Using our skills with additive manufacturing is our way of doing our part to help keep them safe. Additive manufacturing is uniquely positioned to enable a quick response and we felt empowered to use it to make a difference.”

That 3D printing is producing not only for face shields, but for such items as foot, forearm and hand-held door openers at the company’s Raytheon Intelligence & Space and Raytheon Missiles & Defense businesses.

“We’ve received more than 500 ideas from employees across the four businesses to help our employees during this pandemic,” said Alex Meadows, senior innovation advocate at Raytheon Intelligence & Space. “Everyone is affected by this. Everyone is witnessing effects of the pandemic on a global scale.”

Raytheon Technologies is using its manufacturing capacity, and engineering, logistics and finance expertise, to carry out initiatives that serve our communities, deliver on our commitments to our customers and protect our employees during the COVID-19 pandemic. Learn more about our efforts.

Calling All Stakeholders: America Makes and ANSI to Develop Version 3 of Standardization Roadmap for Additive Manufacturing