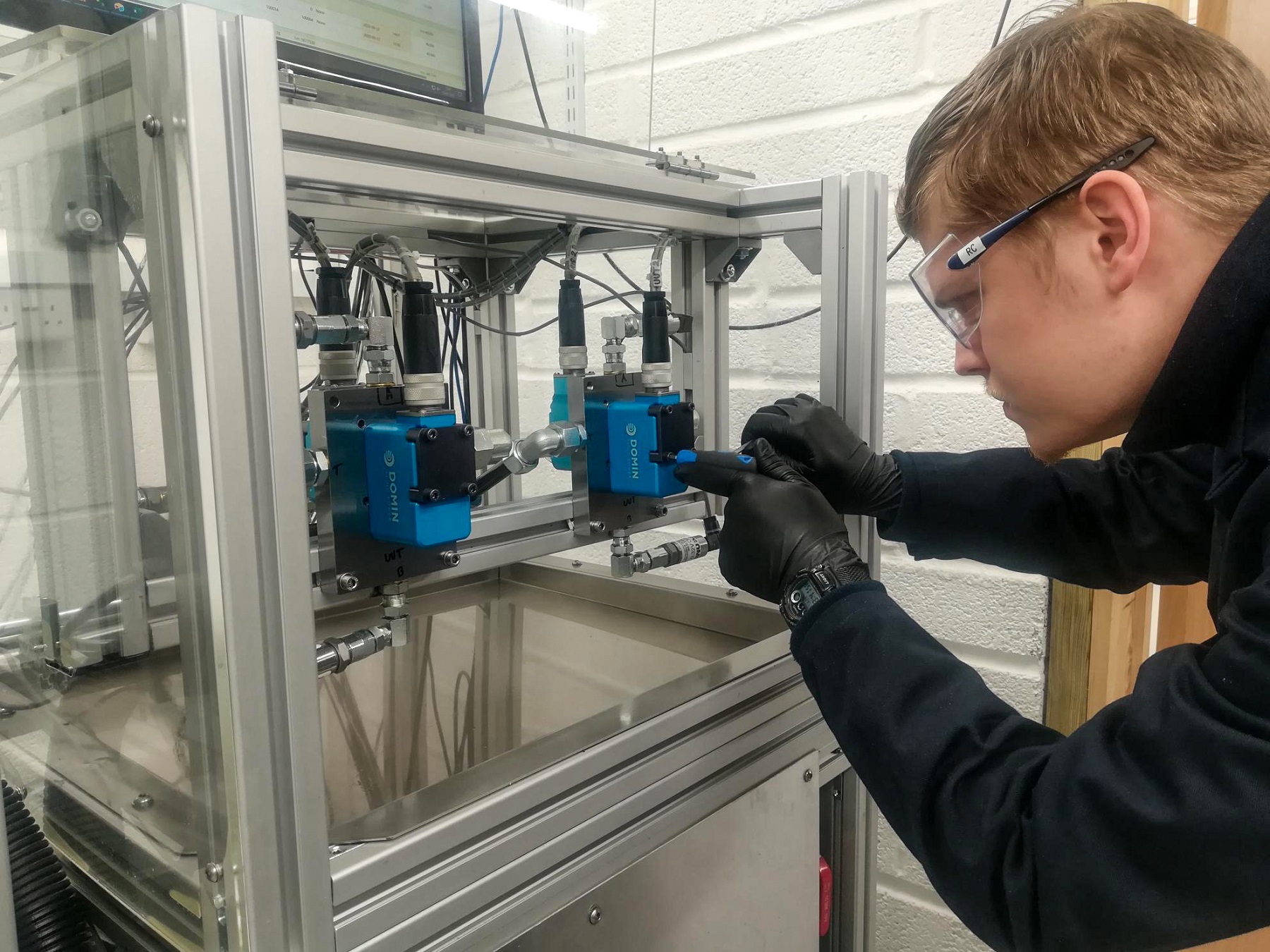 UK-based, Domin, has developed a highly competitive range of state-of-the-art servo valves, and is now setting out to showcase how engineering start-ups can drive value for UK industry. Supported by metal additive manufacturing (also known as 3D printing) technology from global engineering company, Renishaw, the company has produced a first-of-its kind product — a high- performance servo valve. Such innovation represents the company’s first step towards drastically reducing CO2 emissions from the fluid power industry — every valve can save one tonne of CO2.

Domin, based in the city of Bristol, was founded in 2012, aiming to disrupt the fluid power industry by improving the range of technology available and increasing sustainability. Whilst recent decades have seen swathes of technology introduced across all industries, Domin believes that there has not yet been a single innovation that has caused significant enough change in the fluid power market.

For Domin, metal additive manufacturing (AM) was the missing piece of the puzzle, and it turned to this technology to design its product range. This technique, where products are built up layer-by-layer from metal powder, is used across a wide range of industry sectors, including  aerospace, automotive and medical.

By using the Renishaw RenAM 500Q, a four-laser AM system, which is designed for serial production applications, Domin was able to increase its productivity, achieve design freedom and reduce cost per part in such a way that 3D printing presented a compelling case for use in hydraulic manufacturing.

“There is a pressing reason disruption is needed — sustainability. In the US, the fluid power sector alone wastes about 300 million tonnes of CO2 per year through system inefficiencies,” explained Marcus Pont, Chief Executive Officer of Domin. “To put this into context, this is about the same as the total output for all CO2 emissions in the UK. More efficient technology could make a real difference to global emissions.”

“Britain is home to some of the world’s leading engineering businesses,” he added, “However, most of the UK’s big engineering businesses were started in the 20th Century. It’s time for British business to become more ambitious. Combining metal additive manufacturing with other technologies revolutionises what can be achieved technically — it could generate real value for British industry.”

“Additive manufacturing is proving to be a key enabler in many markets,” explained Bryan Austin, Director of Sales, Additive Manufacturing Group at Renishaw. “The productivity that Renishaw’s technology enables means metal 3D printing is broadening into markets where it was previously uneconomical. Domin has showcased how AM can be used to make products better, faster and cheaper than traditional manufacturing would allow.”

Domin’s electrohydraulic valves are designed for the most demanding servo applications and are marketed as small, light, affordable and high-performance products that  are easy to configure online,  offering good power density and dynamic performance.  Pont sees this product range as just the first step in creating change in fluid power systems across the UK; “every valve saves over one tonne of CO2 per year compared with alternative products”.

Long term, Domin plans to start manufacturing and selling complete systems. It is already working on some high-profile projects, which Pont says includes one to develop a new suspension system with Aston Martin Lagonda.

UK-based Renishaw is a world leading engineering technologies company, supplying products used for applications as diverse as jet engine and wind turbine manufacture, through to dentistry and brain surgery. It has over 4,000 employees located in the 37 countries where it has wholly owned subsidiary operations.

For the year ended June 2020 Renishaw recorded sales of £510.2 million of which 94% was due to exports. The company’s largest markets are China, the USA, Japan and Germany.

Throughout its history Renishaw has made a significant commitment to research and development, with historically between 13 and 18% of annual sales invested in R&D and engineering. The majority of this R&D and manufacturing of the company’s products is carried out in the UK.

The Company’s success has been recognised with numerous international awards, including eighteen Queen’s Awards recognising achievements in technology, export and innovation.