Gen. John M. Murray, commanding general of the U.S. Army Futures Command, and other Army representatives visited The University of Texas at El Paso on Monday, Dec. 16, 2019, to learn more about the University’s capabilities in engineering and science research. 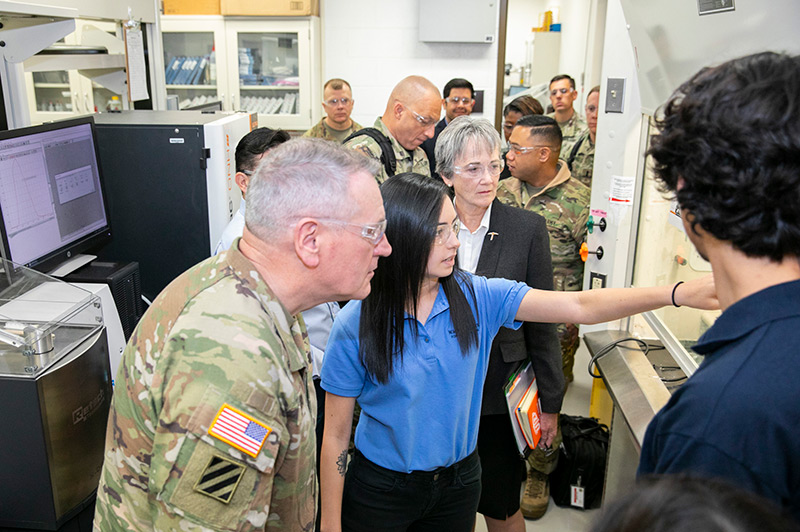 Gen. John M. Murray, commanding general of the U.S. Army Futures Command, and other Army representatives visited The University of Texas at El Paso on Monday, Dec. 16, 2019, to learn more about the University’s capabilities in engineering and science research.

U.S. Rep. Veronica Escobar, who has been a strong supporter of UTEP and its research, also participated in the tour and discussions.

“Technology and science paired with a talented and diverse workforce holds immense promise for the military and our national security and no one knows this better than UTEP’s College of Engineering,” Escobar said. “I am grateful to Gen. Murray for accepting my invitation and to President Wilson for her leadership. UTEP’s success is El Paso’s success, and I look forward to continue working together for the success of our military and our region.”

“UTEP has done exceptional research work for the Army for many years,” said UTEP President Heather Wilson. “Today we explored how we might increase the research we do for the Army on some of their toughest and most important problems.”

“Army Futures Command is focused on modernizing our Army to ensure our soldiers have what they need in the future … and in the ‘future after that,’” Murray said. “To get that right, and to stay ahead, we’re drawing on the very best cutting-edge science and technology … from advanced materials and artificial intelligence to hypersonics. Our leading research universities around the nation are part of our overall effort.

Today is a great opportunity to explore the great work UTEP is doing and how that research might be able to help the Army solve problems. We’re grateful to Rep. Escobar, and President Wilson, for making this visit possible.”

The University of Texas at El Paso enrolls more than 25,000 students and is ranked among the top 5% of universities in the country for the volume and quality of its research. UTEP also leads the nation in educating large numbers of low-income, first-generation college students.

Calling All Stakeholders: America Makes and ANSI to Develop Version 3 of Standardization Roadmap for Additive Manufacturing