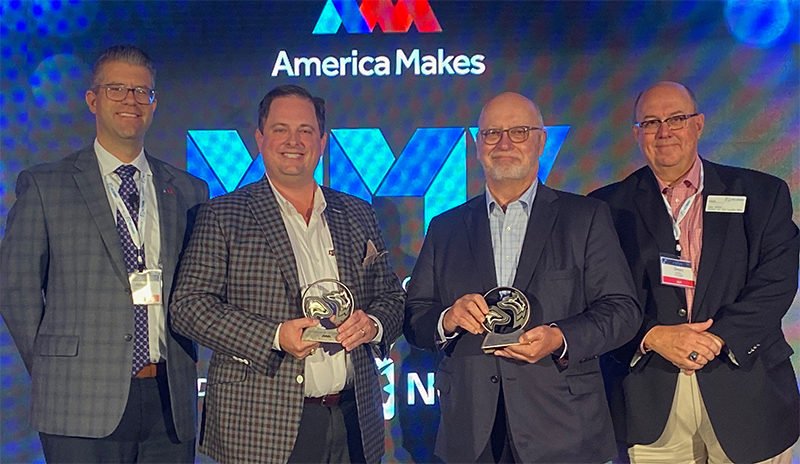 Driven by the National Center for Defense Manufacturing and Machining (NCDMM), America Makes is the nation’s leading and collaborative partner in AM technology research, discovery, creation, and innovation. It is the first of eight Manufacturing Innovation Institutes established and managed by the U.S. Department of Defense as public-private partnerships. America Makes is also a member of the Manufacturing USA® network, which seeks to secure U.S. global leadership in advanced manufacturing (AM).

Established in 2014, the America Makes Distinguished Collaborator Award recognizes an individual or a group of individuals with exceptional commitment and dedication to the advancement of AM technology, practices, and innovation in the manufacturing industry. NCDMM President and CEO Dean Bartles, Ph.D., and America Makes Executive Director John Wilczynski presented the awards to Mr. Resnick and Mr. Gorham, respectively.

“It is my great honor to present this award to my friend, colleague, and collaborator, Ralph Resnick,” said Dr. Bartles. “Without Ralph’s leadership of NCDMM, there would not be an America Makes today, as we know it. Under his guidance and oversight throughout these transformative last seven years, the model of public-private partnerships was established and proven through an extraordinary level of member collaboration. Today, America Makes has attained its goal becoming a recognized national center of excellence for additive manufacturing. While Ralph has embarked on a new chapter of his life, retirement, his legacy will forever be directly tied to America Makes”

“During his tenure at America Makes, primarily as Executive Director, Rob worked tirelessly and enthusiastically to lay the strategic groundwork for the Institute’s continued success,” said John Wilczynski, America Makes Executive Director. “He was the architect for the convener, coordinator, and catalyzer of people, knowledge, and projects brand messaging for defining the Institute’s role within the AM industry. He strongly believes in and supports the mission of America Makes—a fact he continues to demonstrate in his current role at TEES and our second America Makes Satellite Center. We congratulate Rob for this well-deserved honor and his many contributions to America Makes.”

The Institute honors the recognized individuals for cultivating effective collaborative relationships with academia, government, and industry, and contributing to the mission of America Makes. America Makes Distinguished Collaborator Award recipients are presented with an award of an artistic rendering of an American Badger and a Coyote, a symbolic representation of the collaborative association these two animal foes and competitors have forged.

Mr. Resnick joined NCDMM in September 2008 as Vice President, Chief Technology Officer with more than 35 years of manufacturing experience. He assumed President and Chief Executive Officer in May 2011 and led the NCDMM to winning the competitive National Additive Manufacturing Innovation Institute contract. Upon award, he also assumed the role of Acting Director of the Institute, now known as America Makes, until February 2013 upon appointing a new director. In May 2019, Mr. Resnick stepped down as President & CEO and assumed a new role as NCDMM Fellow until October 2019 when he retired from the NCDMM.

Prior to joining NCDMM, Mr. Resnick served as Chief Technology Officer for both The ExOne Company and Extrude Hone Corporation where he was a major contributor in establishing both organizations as leaders in such advanced manufacturing areas as AM, process research, and technology transition to the world’s factory floors. He holds several patents in manufacturing processes and metrology.

Locally, Mr. Resnick is active in the Board of Directors for the Central Allegheny Challenger Learning Center (CACLC) in Indiana County; the Westmoreland-Fayette Workforce Investment Board; and the Westmoreland Heritage Trail.

Mr. Resnick is a Fellow of SME and in 2010, he received the NAMRI/SME “Outstanding Lifetime Service Award.”

He has more than a decade of solid defense research and advanced manufacturing experience. Prior to joining America Makes, he was the Senior Manager of the Manufacturing Exploration and Development (MXD) group within the Advanced Manufacturing Systems and Prototyping (AMS&P) directorate of Lockheed Martin (LM) Aeronautics – Advanced Development Programs (ADP). In this position, he was responsible for leading the transition-focused development and the application of affordable manufacturing technologies for LM Aeronautics and other LM Business Areas across the corporation.

Mr. Gorham joined Lockheed Martin in 2003 as a systems engineer supporting the F-35 Autonomic Logistics Design Integration team. In 2005, he was nominated and selected to join the Engineering Leadership Development Program and during the three-year program, he progressed through a variety of positions of increasing responsibility, gaining valuable experience with the F-35 Wingbox Design Team, F-22 Modernization Program Office, and ADP Advanced Manufacturing Systems and Prototyping Team.

He holds a B.S. in Aerospace Engineering from Texas A&M University and a M.S. in Engineering Management from Southern Methodist University. 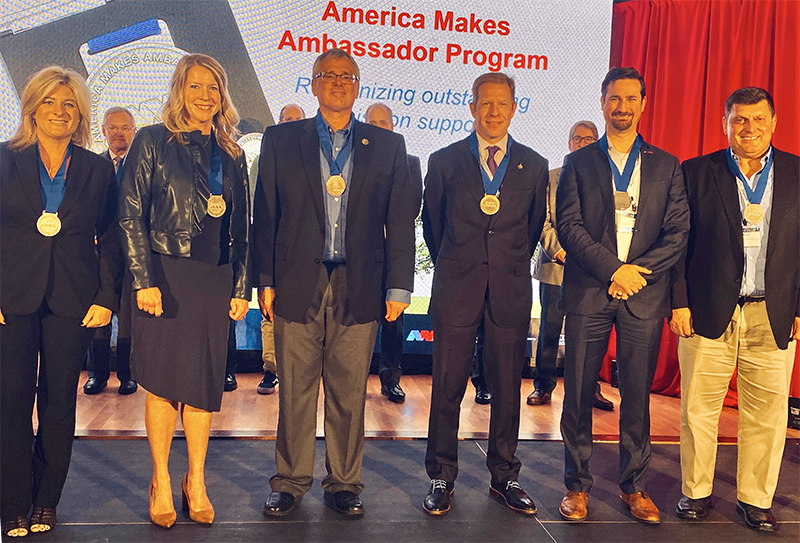 Visit americamakes.us for more information about America Makes, the MMX event, or on becoming a member. Follow us on Twitter @AmericaMakes.

NCDMM delivers innovative and collaborative manufacturing solutions that enhance our nation’s workforce and economic competitiveness. NCDMM has extensive knowledge and depth in manufacturing areas—both commercial and defense—to continually innovate, improve, and advance manufacturing technologies and methodologies. Our experienced team specializes in identifying the needs, the players, the technologies, and processes to attain optimal solutions for our customers. We connect the dots. That’s the NCDMM methodology. NCDMM also manages the national accelerator for additive manufacturing (AM) and 3D printing (3DP), America Makes—the National Additive Manufacturing Innovation Institute. For additional information, visit the NCDMM at ncdmm.org and follow @NCDMMnews on Twitter.