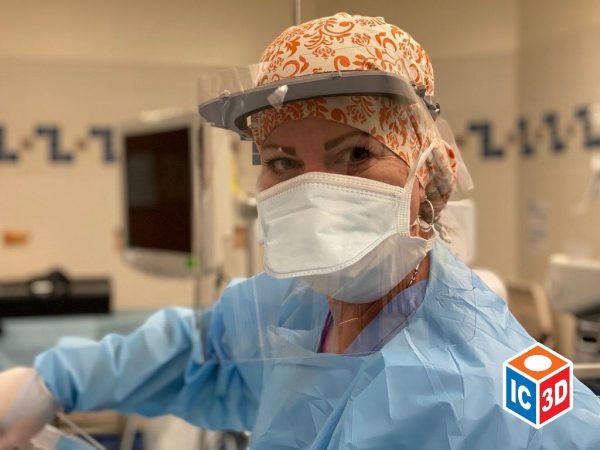 Image: An IC3D Budmen face shield in use on Jennifer Campbell, Anesthesiologist at Kettering Hospital [IC3D]

3D printing is enabling many a small business the agility to pivot operations toward localizing their supply chains.

IC3D is a relatively small operation based in central Ohio that focuses heavily on nearly every aspect of 3D printing, from materials production (including the first open source filament) to on-demand manufacturing and custom 3D printing equipment.

I spoke recently with the team’s CMO — that’s Chief Mischief Officer — Kimberly Gibson for a look into how 3D printing is impacting the supply chain as well as this industry’s strategic importance in times of crisis.

As so many other operations housing 3D printers have been doing these last few months, IC3D recently found itself changing up its production focus.

“We are one of many small companies able to really pivot during this crazy time and begin trying to serve the medical supply chain,” Gibson told me. “We had not had a great deal of activity before, but I think what we did that was a little different was doing the Toys For Tots drive. That was really an experiment in distributed manufacturing that we were able to scale up rapidly during COVID. We already had two years of experience sending filament to makers and scaling that up.”

IC3D’s work with Toys For Tots included donating filament to the US-based 3D printing community and in turn getting back 150 3D printed robot toys that the Marines distributed to children for some Christmas cheer. Coordinating this effort, and getting more Marines more familiar with 3D printing and distributed manufacturing possibilities, laid some groundwork that proved important as crisis descended upon us.

“That in and of itself is maybe not remarkable anymore, but I think the combination of creating a charitable donation portal, establishing relationships with a national retailer that will take this 3D printing donation and build it up and blow it up to drop off — we have that organization in place,” Gibson continued of how Toys For Tots prepared IC3D for a less fun-and-games-oriented need for such organization and relationships.

For IC3D, she said, those lessons included organizing their supply chain to respond to a single need.

“3D printing has certainly been doing this before much of the nation could really understand what was happening. In the last month, we’ve moved a variety of objects into tens of thousands in a matter of three weeks. No matter what business you’re in, that is scaling,” she continued.

IC3D turned its efforts toward producing much-needed personal protective equipment (PPE) to distribute to medical providers at the frontlines. Focusing particularly on producing face shields for the central Ohio area, IC3D has been coordinating responses between those who need and those who can 3D print, as well as organizing donations for those who’d like to help but don’t have a 3D printer.

Importantly, IC3D has never lost sight of the human element of this crisis. It’s absolutely a difficult time for businesses, but moreso on people, with the US recently passing a 100,000 tragic milestone of lives lost to COVID-19.

“Where my head has been in the last few weeks has been going through the emotions of what this means on a human level,” Gibson said somberly. “The humility of being able to help in a time when many others are home and not able to help: it’s been humbling, it’s been really incredible, being able to hire people who were unemployed to help us scale appropriately and really quickly… You’ve got your making force, the people with the 3D printers, and you’ve got the people who assemble the finished product.”

Where IC3D sees itself and similar small companies now is solidifying a place in the larger supply chain.

“You can make at home, but if you don’t put that together with the other places of the supply chain it’s not helpful. What we could do in a short time frame was assemble that supply chain, get everyone organized, and do it in a charitable way,” she said.
While we have been hearing seemingly endless stories of 3D printed and donated PPE — a very good thing to hear, mind — what’s often left out of those feel-good stories is the behind-the-scenes organization that needs to come together to make it possible.

Coordinating the efforts of those who want to help with the supply chain to obtain the necessary materials and then deliver finished goods en masse to those who need help is no mean feat. And the lessons learned in these trying times will extend in many ways to the “after times”.

The US faced its initial wave and business restrictions in March; as the year has moved on, there’s finally a bit of room to reflect on what’s happened in that time since.

“Getting past the first month of COVID, I’ve had a chance to sit back and think what does this mean for the future. We know this virus isn’t going away, if we believe everything we hear from the doctors. We know it is not levelling off really, so what are we going to do? When the fall hits, we could be in this same situation yet again,” Gibson reflected.

“As a person in manufacturing who’s used to really getting things done and fighting hard, I don’t see 3D printing going away or being irrelevant in the fall. Really, what I want the industry to do is talk about the long-term viability of additive manufacturing for this kind of thing, to find our unique place inside of this. What are the policies we need to put in place at a national and local level to make sure all of us are ready — and that additive manufacturing is ready?”

For Gibson, a major takeaway to answer this comes down to one factor that 3D printing has long been touting as a benefit: localization.

Decentralizing the supply chain has proven to be critical to fast-acting responses to pandemic-driven needs, and meeting those needs where they exist. We’ve heard from other 3D printing industry participants whose coordination efforts have been helping meet localized needs at a national level, for example, putting 3D printers to work and getting the resulting PPE straight to nearby hospitals that need it.

She pointed as well to other thinking points that can serve as takeaway lessons from the current crisis.

“For years we’ve had a strategic petroleum reserve; I’m not sure we ever really widely thought about a PPE reserve,” she noted. “And what will it be next time? Metal powders, polymers: no matter what the need in a crisis is, we need to have these materials at the ready in order to make and produce whatever is needed. We’re having the AM industry start to lead, not only in applications and involvement, but at a policy level; we need to think about what the different types of manufacturing can contribute to a very resilient, very coordinated global supply chain.”

Recognizing that this is not so easy to navigate as it might seem, localizing supply chains is perhaps a long-term goal — but one we collectively ought to be focusing on starting ASAP.

“I’m not looking for a bunch of convoluted policies; re-localized supply chains are necessary for any crisis we may face as a human society. For us as a community, we need to really be talking about it. We’ve shined, and now it’s our moment to take it to the next level,” she said of the 3D printing industry.

Long-lasting sea change in policy and overall supply chain structuring is going to be a long process, perhaps — but one thing we have already learned from this crisis is that quick action actually is possible.

“We’re building long-term viability for additive manufacturing. America Makes is doing a lot of us, in terms of medical accountability and being validated, which is so important. I never thought it could go so fast. Our [face shield] design was validated in three days,” Gibson said. “I like thinking through the policy choices we as an industry can help shape, and feel this need to do it quickly.”